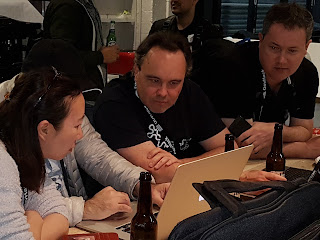 I've finally attended the GovHack weekend. As a dad, weekends used to be for taking kids to birthday parties and soccer games. But my boys have grown up, giving me the chance to see how GovHack compares to the Open Source communities I've been involved with for decades. I wanted to see what each can learn from the other and signed up as a coach.
GovHack is an annual event where volunteers band together for 48 hours to write applications with Open Government data. Participants compete for prizes for the most innovative and useful applications. It has grown every year since it started in 2009, attracting thousands of volunteers, running in 36 locations across Australia and New Zealand, and attracted numerous sponsors and an excessive list of open government datasets. Credit must go to the organisers for creating such a sustainable winning formula. But lets ask some tough questions and hopefully help GovHack become more impactful in future?


What is the point of GovHack?

What is the point of GovHack? It wasn't obvious from looking at the main website, but I found an answer buried in the GovHack 2016 Year in Review:


In his opening address, Craig Laundy, the Assistant Minister for Industry, Innovation and Science highlighted that open data was one of the keys to the Australian Government’s National Innovation and Science Agenda. He read a letter from Prime Minister Malcolm Turnbull which paid the following tribute to Govhack:
“Data without ingenuity is like a lamp without power – only when the two are connected do opportunities to innovate become clear. This is why GovHack is so important.”

Recommendation 1: We should be clear about the purpose and value of GovHack. We should prominently promote messages like "GovHack aims to contribute to the government's Innovation Agenda by encouraging and facilitating ingenuity with government's open data."

So how successful has GovHack been at enabling innovation? It's hard to say really. The 2016 Year in Review provides plenty of details about numbers of participants, datasets used, awards, VIP presenters, red carpet events, but there is barely a mention of how successful GovHack has been at enabling innovation. The best I could find was a passing mention of an "IP Nova App" which started in GovHack 2015. I’ve since been told about a couple of others. But the point is that we are measuring how busy everyone is, and how much buzz is being created, but completely failing to report the impact on innovation.

Recommendation 2: Let's measure and report on the realised innovation resulting from GovHack. Let's then assess results and work out ways to improve GovHack's impact on innovation.

Why is it hard to find reports of GovHack ideas progressing into sustained initiatives? I can't say for sure, but suspect very few GovHack ideas actually grow into something. The simple truth is that good software takes substantial effort to design, write, test, deploy and maintain. While a 48 hour GovHack is useful for brainstorming ideas, it stills requires significant follow up if it is to mature into something useful. And here we notice the difference between Open Source Code Sprints and GovHack. On completion of Code Sprints, there are established and experienced communities committed to adopting and advancing worthy ideas. Who in the GovHack community is offering to help take good ideas through to maturity? I don't see such support mentioned in GovHack web pages.

The majority of people I saw in the Sydney GovHack appeared to be University students or recent graduates. For these young people, GovHack provides a great practical learning experience, some mentoring, and an opportunity to network. However I couldn't help feeling there was an level of exploitation of these young volunteers. Government agencies are gaining significant value from volunteers testing their datasets, something that would cost orders of magnitude more if implemented internally. Morally, I feel these agencies should give more than a free meal and a chance to share in a prize. A good symbiotic relationship would hopefully consider providing more value for our young community.


How good is the data?

Integrating data into innovative web or mobile applications typically should follow standard design patterns, with data published through a web service, then processed, integrated, and presented in innovative ways. Ideally government agencies should make data really easy to use, setting up data web services and providing clear documentation and examples. Instead teams were spending much of their GovHack time setting up the infrastructure to publish this data rather than spending their time being innovative.
It is worth being reminded of one of The Australian Digital Transformation Agency Design Principles:


Principle 4. Do the hard work to make it simple.
Making something look simple is easy. Making something simple to use is much harder - especially when the underlying systems are complex - but that’s what we should be doing. Don’t take “It’s always been that way” for an answer. It’s usually more and harder work to make things simple, but it’s the right thing to do.


Recommendation 5: Government should define a best practices guide for publishing data services, and then follow this guide.

How does government know if they are doing a good job? Ruthless survival of the fittest principles apply to Open Source and market economies. People don't buy substandard products. Only the best Open Source projects attract communities. Again, refer to the DTA design principles:


Principle 5. Iterate. Then iterate again.The best way to build good services is to start small and iterate wildly. Release minimum viable products early and test them with actual users; move from Alpha to Beta to Live adding features, deleting things that don’t work and making refinements based on feedback. Iteration reduces risk: it makes big failures unlikely and turns small failures into lessons. If a prototype isn’t working, don’t be afraid to scrap it and start again.


Recommendation 6: Agencies should measure the usability and usefulness of their datasets, assess and adjust accordingly. GovHack provides an opportunity to measure these metrics.


How good are we are implementing Open Government?

And so I come to my most pointed point, which was recorded as a video for my GovHack contribution:

Australia has embraced great policies around Open Government. These describe how openness and collaboration enable innovation. However, the practical implementation of these open principles have proven elusively difficult, with reported success stories coming from a few charismatic champions rather than being systemic across all government.
Why is that? Well, it’s complicated. There is a wealth of established wisdom, spread across the domains of Open Source Software, Open Standards, Open Data, Open Government, and more. However, we still lack clear and definitive guides which draws all this wisdom together into practical playbooks which can be easily applied by government agencies. Instead, current government practices and guidelines regularly hinder collaboration. Let’s fix that.


Could GovHack be more impactful?

Acknowledging that GovHack runs impressively efficiently and has attracted a huge ground swell of interest and momentum, could we make it more impactful? I think we can. We should remind ourselves of the Open Government and GovHack goal of promoting innovation. We should measure innovation enabled and adjust accordingly. Adjustments will likely include aligning more closely with Open Source development practices.

Posted by Cameron Shorter at 9:52 pm

This story was picked up by the Mandarin.