Following on from signification discussion and concern from OSGeo and OGC communities, members of the OGC have withdrawn the "Geoservices REST API" candidate OGC standard.
Thank you to all the people who have voiced their concerns, thank you to those who provided detailed reasoning and analysis, and thank you to the OGC and OGC members who have acknowledged and have started actioning this reasoning. You are contributing toward a better OGC for us all.
Carl Reed, CTO and Executive Director of OGC Standards Program made the following announcement:

On Tuesday of this week, the GeoServices REST API Standards Working Group (SWG) voted to approve the following recommendation to the TC Voting Members:

Moved: Keith Ryden. Second: Clemens Portele. There was no objection to unanimous consent.
The following is the reason for requesting the motion to approve the candidate standard be withdrawn:


“Considering the breath of discussion both internal and external to the OGC process since the vote announcement, the SWG members feel that the vote cannot continue until the many questions raised have been addressed. Issues regarding OGC process, vendor advantage, duplication of capabilities, etc. have now overshadowed technical discussions of the merits of the specification. By withdrawing the OGC GeoServices REST API candidate standard, the necessary discussions regarding OGC process, policy, and position can continue separately.”

The SWG further discussed the need for OGC Members and staff to debate, clarify and potentially amend a number of policy and procedural issues before the SWG can decide to either disband or to resume technical work on the candidate standard.
Today or tomorrow the TC Chair (me) will be asking the TC Voting Members to consider the GeoServices REST API SWG recommendation. The motion is:


"The GeoServices REST API SWG recommends that the GeoServices adoption vote be withdrawn.  If there is no objection to unanimous consent in the next 10 calendar days, then the motion is approved. If there are objections, than a two week e-vote will be initiated."

Over the coming months there will be opportunities for OGC staff, members and the general public to engage in discussions related to policy and procedures, such as clear statements on openness and interoperability, overlapping standards, backwards compatibility and so forth. The idea is to begin a dialogue as part of the virtual meetings this and next month with a goal to address the issues raised and recommend changes at the upcoming September Frascati meetings.
I would like to thank the SWG for all of their hard work on the candidate standard. I would also like to thank everyone who contributed to the conversation.
Posted by Cameron Shorter at 2:51 pm 1 comment:

In what has become the Open Geospatial Consortium’s (OGC) most contentious vote to date, OGC members are being asked whether the proposed "Geoservices REST API" should be accepted as an OGC standard. A summary of concerns is listed in an Open Letter from the Open Source Geospatial Foundation (OSGeo) to the OGC. However, the crux of contentions hinges around the definition of an Open Standard and whether the "Geoservices REST API" qualifies as one.
When measured against government’s policy drivers of interoperability, fair competition, and economical use of government funds, the evidence is overwhelming. "Geoservices REST API" fails on all accounts. In fact, we should be questioning why our OGC processes haven’t identified and then addressed these issues much earlier.


What is an Open Standard?

Most government purchasing guidelines, such as the United Kingdom Open Source, Open Standards and Re­Use: Government Action Plan, now include clauses such as:

Consequently, government contracts typically specify use of standards when purchasing systems. This places a responsibility on standards organisations to protect government policy when selecting and defining the standards baseline.
Superficially, the "Geoservices REST API" meets the European Interoperability Framework minimal definition of a standard:
However, the "Geoservices REST API" falls short of addressing government policy drivers for the creation of standards. These are summarised in the Guideline on Public Procurement of Open Source Software, written for the European Commission:


Public sector consumers of software have an obligation to support interoperability, transparency and flexibility, as well as economical use of public funds. When it comes to public procurement, the principles applied to the public sector require them to support (and certainly not to harm) competition through their procurement practices.
Good practice eGovernment services should provide access based on open standards, and in particular, never require citizens to purchase or use systems from specific vendors in order to access public services: this is equivalent to granting such vendors a state-sanctioned monopoly.


... use/modify/create open standards, in that order.

Unfortunately, the "Geoservices REST API" would create new standards rather than use and/or extend existing OGC web services. Emphasis on reuse of standards is important for increasing interoperability, as duplication of standards typically results in:
Costs increase, interoperability decreases.

ESRI’s ArcGIS Server is currently the only server which provides a full implementation of the "Geoservices REST API", as you would expect when an API is derived directly from a product. As such, if the "Geoservices REST API" were to be included in the OGC baseline, and government contracts continue to reference the OGC baseline in contracts, then governments would be giving one vendor a significant market advantage while other vendors wear the cost of developing matching implementations for the proposed standard.
Further, ESRI may continue to use its market dominance to promote use of the "Geoservices REST API" at the expense of existing OGC web services. (As described in ArcGIS Server documentation, support for OGC’s W*S services are disabled by default while GeoServices REST and KML are enabled).


Where are the Open Source implementations?


Verify that the standards used are open; a simple test for openness is to determine if the standard is implemented by open source software.

There are 481 OGC members, with close to 100 of them with voting privileges, yet regularly, less than 40% of these voting members actually vote on proposed standards. This is a concern if these members are being relied upon to uphold OGC values, and we should question why voting is so low. A key factor in low voter turnout is likely the complexity and volume of material voters need to understand in order to make an informed decision. Gatekeepers just don’t have the time to be abreast of all the issues, and current standards are hard to read. The increase in the breadth and application of OGC standards has led to a stronger need for integration of standards, architectural overviews, and clearer implementation guidelines.
Maintaining and verifying quality best addressed by defining and following development and validation processes, and OGC processes should be improved to match the complexity of the systems they represent. In particular, OGC should revisit goals and requirements for quality standards, then resource technical writers and reviewers to work against such requirements. Approving a standard is therefore simplified to verifying the process is valid and has been followed. This would require OGC sponsorship priorities changed to provide greater emphasis on quality over quantity of standards.


A blueprint for moving forward

Let's expand on the steps involved in deciding on the value of a standard:

As the success of the OGC increases, the OGC will need to be mindful of business and policy implications associated with adopting established interfaces as standards. Specifically, accepting the currently proposed "Geoservices REST API" as a standard will have detrimental impacts on interoperability, fair competition, and economic use of public funds. Instead, the positive aspects of the "Geoservices REST API" should be harmonised and incorporated into the existing OGC baseline of standards. Also, as the breadth of technology covered by OGC standards increases, it is becoming more difficult for gatekeepers to monitor the quality of these standards and consequently it is becoming more important to focus on quality and understandability of these standards. In moving forward, the OGC membership should revisit OGC priorities, and consider placing a greater emphasis on quality over quantity.

As a result of this, an open letter, and many other objections, the Geoservices Rest API was withdrawn from being considered as an OGC standard, as described here. The OGC then initiated an Ideas4OGC review, to rebaseline OGC priorities and processes in order to address weaknesses that had been identified in OGC processes.
Posted by Cameron Shorter at 12:33 pm 2 comments: 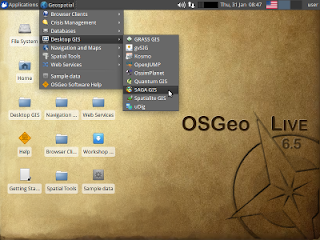 We are starting the build cycle for the 7.0 OSGeo-Live DVD/USB/VM which will be released in September 2013, ready for the global FOSS4G conference in Nottingham, UK. We would like to hear from anyone wishing to add new projects to the live DVD, anyone wishing to extend or add extra translations, or anyone who has ideas on how we should shape the upcoming release.
Also, could all projects please reply to us with which stable version of their software should be included in this release.

We have released the first alpha version of OSGeo-Live, which includes an update from Xubuntu 12.04 to 12.04.2 along with updated versions of applications from UbuntuGIS repository. Feel free to start testing your applications in the latest release. Download Alpha 1

The OSGeo Live demo DVD/VM/USB is an Xubuntu based distribution of Geospatial Open Source Software, available via a Live DVD, Virtual Machine and USB. You can use it to try a wide variety of open source geospatial software without installing anything.
Posted by Cameron Shorter at 3:05 pm No comments:

Next Wednesday, the OSGeo Board will deliver an Open Letter to the OGC and OGC voting members, with multiple signatures, demonstrating the large number of people concerned about the negative consequences associated with making the "Geoservices REST API" an OGC standard.
The "GeoServices REST API" was initially developed by ESRI and implemented on the ArcGIS Server platform before going through the OGC process. It significantly overlaps with OGC's existing W*S services, but isn't based upon these existing standards.  Consequently, we have grave concerns that the two competing sets of standards, which essentially cover the same use cases, will have far reaching, detrimental impacts on interoperability, complexity, and costs within the spatial industry, including being bad for Geospatial Open Source software.

Many people, including leaders of OSGeo and related communities, have already signed this letter. Thankyou. If you agree that "Geoservices REST API" will be bad for OSGeo and/or the greater spatial community, then please help us deliver this concern to OGC voters before they vote. Add your signature to the Open Letter before we deliver it on Wednesday 15 May 2013, and forward this message onto other OSGeo communities. (I notice that messages from this thread are being forwarded to the Spanish OSGeo email list. Thankyou.)

If you are looking for a deep analysis of the issues, I suggest reading the open letter which is now draft complete: http://wiki.osgeo.org/wiki/Geoservices_REST_API.
Posted by Cameron Shorter at 10:20 pm No comments: