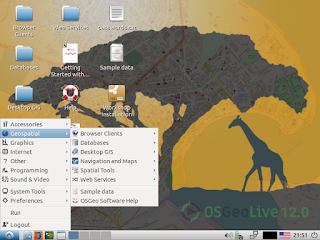 Are you wondering what OSGeo docs would look like if they were written by a senior technical writer? Then check out the latest OSGeoLive Quickstarts. All English Quickstarts have been reviewed and improved by Felicity Brand as part of ​Google Season of Docs. We've published them in a docs only point release of OSGeoLive, version 13.1. (We've also re-introduced our presentation, thanks to bug fixes from Seth.)


What else happened with OSGeo's Google Season of Docs?

OSGeoLive is a ​Lubuntu based distribution of Geospatial Open Source Software, available via a Live DVD, Virtual Machine and USB. You can use OSGeoLive to try a wide variety of open source geospatial software without installing anything.
Posted by Cameron Shorter at 4:48 pm No comments:

During OSGeo Foundation’s involvement in Google Season of Docs, we discovered that, like many open source projects, we knew little about:
We discovered:

It is an exciting problem space with high-value challenges ready to be tackled. It reminds me of the early days of open source before it became trendy with business.


What should tech writers work on?

Open source communities welcomed the chance to have tech writers improve our docs, and expressed a pressing need for it, but found it hard to articulate exactly what needed fixing.
But where should we start? We needed to decide on what we wanted, and what we should work on first.


What’s the definition of good docs?

And then we realised that we didn’t have a good definition of “good documentation”. For our software projects, we have a comprehensive incubation process to assess the maturity of software and the project’s community, but we couldn’t find a similar set of metrics to define “good documentation”. So we started TheGoodDocsProject, to collate “best-practice templates and writing instructions for documenting open source software.”
This helped us define what we were aiming for, and prioritise what we can achieve with our available resources.

Once we knew what good docs looked like, we were then able to audit the status of projects' docs:
We discovered that the quality, currency, and completeness of our OSGeo docs were immature when compared to the quality software they described.


It takes a village to raise good docs

In researching open source projects’ documentation needs, it’s become clear that crafting good docs requires multiple skillsets. Ideally, a doc team has access to:
Technical writers usually have a high-level understanding of most of these domains and their skills are often under-appreciated and under-utilised, especially if directed with a vague “just clean up the grammar and stuff”.
However, the best docs typically have had been influenced by multiple stakeholders. This can be partly achieved using templates to collaborate between domains, timeframes, job roles, projects and organisations.

We experienced significant pain in trying to convert between writing and software toolsets. We love the versioning of git, are frustrated by clunky markdown interfaces, and want access to editing and review workflows of Word and Google Docs, along with grammar and syntax plugin tools such as Grammarly. Translation tools such as Transifex are pretty cool too.
Could someone please write an application which addresses this use case. Maybe there is an idea in here for a future Google Summer of Code?


Achievements during OSGeo’s Season of Docs

Thank you Google for sponsoring Season of Docs. Felicity and Swapnil who you sponsored for us were great. We’ve learned plenty from them, and we hope you can take what we have collectively learned to help make future Season of Docs initiatives even better.

This story was picked up by:

Posted by Cameron Shorter at 4:43 am No comments: