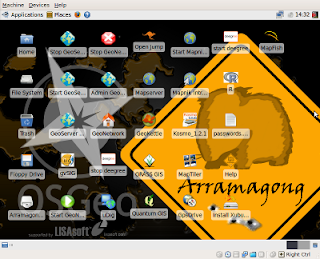 After a hive of activity from a team of 20 or so people, we have a Geospatial Live DVD and Virtual Machine with a comprehensive collection of Open Source Geospatial Software. The Arramagong Live DVD was sent to the printers last week and will be handed out to all delegates at the international conference for Free and Open Source Software for GeoSpatial, http://2009.foss4g.org.
But probably more valuable than this specific release is the fact that we have automated the building of the LiveDVD so that anyone with a decent internet pipe can build themselves a customised GeoSpatial LiveDVD in 24 hours - a task that used to take months and was consequently a major development barrier.
As LISAsoft discovered when helping build the LiveDVD for FOSS4G 2008, there are a number of barriers to packaging. Ideally, all projects should package their applications in .deb files, aligned with DebianGIS and UbuntuGIS projects. Installing .deb files into a LiveDVD is as simple as:

However, there is a non-trivial learning curve for packaging applications for debian, and Java packaging is poorly supported, and there has been a knowledge gap between packagers, familiar with packaging, and developers familar with installing their specific application. So only a few of the popular GeoSpatial Open Source applications are easily installed on Linux. Most OSGeo applications need to be manually installed, and hence packaging for the FOSS4G 2008 LiveDVD and the GISVM involved dedicated developers putting in hero efforts to learn and apply the specific install instructions and dependencies for each project individually. It took months.
For FOSS4G 2009 we have been smarter. We asked projects to write a command line installer script for their packages, in line with a provided template. We then strung all the installers together in an automated master build process. This meant:
And as a by product, these scripts are the key element Debian packagers require to build .deb packages, so we should expect to see many of these projects appear in the next Debian and Ubuntu releases.
What next?
Credits
Many people worked very hard to get all these applications in place in such a short period of time. I'd like to thank you all for all the help. (I'd try and list you all, but I'm afraid I'd miss someone).
Posted by Cameron Shorter at 2:43 pm

Excellent information. Thank you for adding your thoughts on geospatial topics via blogging.